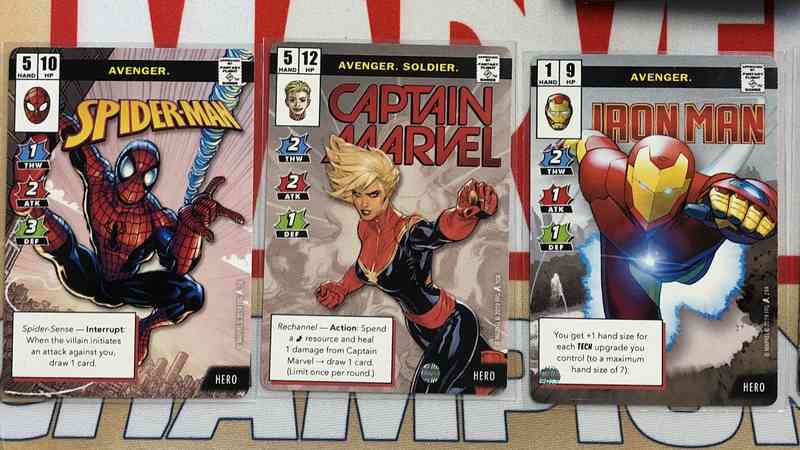 Iron Man and Black Panther team up to stop Rhino from rampaging through the streets of New York.

Do you have what it takes to join the ranks of these legendary heroes and become a champion?

Jump into the Marvel Universe with Marvel Champions: The Card Game, a cooperative Living Card Game for one to four players!

Marvel Champions: The Card Game invites players to embody iconic heroes from the Marvel Universe as they battle to stop infamous villains from enacting their devious schemes.

As a Living Card Game, Marvel Champions is supported with regular releases of new product, including new heroes and scenarios.

—description from the publisher

Added the “Ask for help” option on a players turn.

It stitches the default schemes in one coherent story. Rather than random heroes, villains, or modules; each mission will give you exact guidelines on what content to play with, so that you can have a well-rounded experience with all the content from the box.

A solo campaign for Spiderman Justice, weaving cards from the core box and Green Goblin expansion into a thematic ride.

Spiderman is not a hero yet. Peter Parker is an inexperienced underdog with no gadgets and few allies. Unlock his cards with each battle.

Vulture is a standalone villain, a real monster… stealing Parkers’ gadgets, kidnapping his friends, and punching far above his weight. Watch him become Spiderman’s nemesis!

Meanwhile, Green Goblin releases a horde of goblins onto the streets.

New version. Added rules for the Sinister Motives Expansion and also handy pre-game and post-game checklists. Tweaked some rules slightly as well to simplify things, removing the penalty rule and making it a campaign loss instead.

Rules for linking multiple games of Marvel Champions together in a brief four-game campaign. Rise of Red Skull expansion recommended.