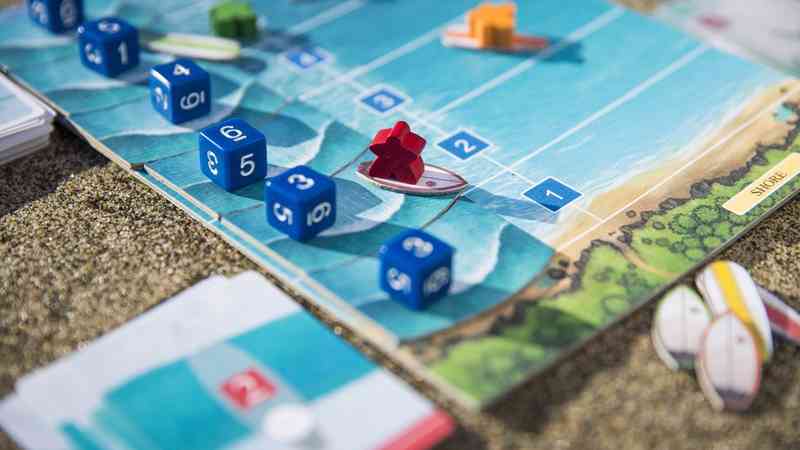 Tavarua is a 1-6 player competitive surfing board game.

In Tavarua you are a surfer in a surf contest. You’ll need to pick a board, paddle out, look for waves, and ride them in to score points!

Tavarua is played over a number of short rounds. In each round waves advance towards shore, players simultaneously select then resolve actions by playing cards, and a wave card is revealed and resolved. Rounds continue until there are no more wave cards in the wave deck, at which point the game ends and one player claims victory.

Goal
The goal of the game is to win the grand champion trophy, by having the highest scoring waves. You score points by catching and riding waves, but you may only keep your top two wave scores for each board type. General gameplay involves looking for a wave to ride, paddling to the wave, catching the wave, riding the wave, then scoring the wave. When the game ends, three trophies are given out, whoever gets the Grand Champion trophy wins!

Paddling to a Wave
Paddling moves your surfer in the channel. You can play any card to paddle, the number on the card determines how many spaces you move.

Catching a Wave
You can only catch the wave that’s in the same space in the break as your surfer is in the channel. To catch a wave, you’ll need to play a card. The number and direction on the card will shift your balance. When catching a wave you’ll want to look at the top card of the wave deck to determine which card to play. You want to play a card that will shift your balance so that you do not wipeout during the Wave / Score phase. You now move your surfer/surfboard onto the wave tile (standing your surfer up) and finally move your played card over to your score pile.

Scoring a Wave
When riding a wave: cards played are not discarded, but placed into your score pile. The numbers on the cards determines the score value of that wave. When you stop riding a wave you will score it during the “Wave / Score” phase of that round. To score a wave take one of your color score tokens, with the board you’re currently riding, and place it on score track at the number equal to your wave score point value, then discard all the cards/tokens in your score pile.

The file contains 6 pages. The rules reference itself is only 3 pages. The content of pages 4-6 is identical to pages 1-3 with most of the background colors and shading removed to reduce printer ink consumption. Pages 3 & 6 each contain the variant and solo rules.

A set of 5 printable surfer sheets for playing Career Mode in Tavarua.